When you think about factors that increase your skin cancer risk, you probably think of direct sun exposure, repeated sunburns at the beach, tanning by the pool, or spending endless hours outdoors. Truthfully, the sun’s UV radiation reaches nearly everywhere, including inside your car.

There are two types of skin-damaging UV radiation emitted by the sun: UVA and UVB rays. The latter form is mostly blocked by car windows; however, one study found that while the front windshield blocks 94 per cent of UVA rays, the driver’s side window only blocks 71 per cent.

UVA radiation has a longer wavelength than UVB, allowing it to penetrate deeper into the skin. UVA is the main cause of premature skin ageing, and can also lead to sunburn and skin cancer.

In Australia, people spending a lot of their time driving have an increased risk of skin cancer and UV-induced skin damage on the right side of their body, due to the UVA light passing through the driver’s side window of their car.

Anecdotally, our Skin Cancer Doctors see more skin cancers developing on patients’ right arms and the right side of the face, which are directly exposed to their car windows. 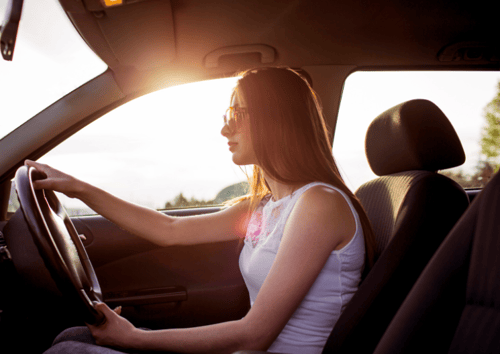 In the United States, 74 per cent of melanomas appear on the left side of the body (the side exposed to the driver’s windows in the US), which suggests that the deeper penetrating UVA rays may be contributing to the rise in this more invasive, deadly form of skin cancer.

So what can you do to protect yourself in the car? It is recommended that you apply a broad-spectrum SPF50+ sunscreen during longer car rides, along with a long-sleeved shirt and sunglasses.

Blocking out the sun with your visor is also a good idea for both protecting your skin and helping you see better. Tinting on your car windows is also suggested where regulations allow. This can reduce – but not eliminate – your UV exposure and subsequent skin cancer risk.