The skin is the largest external organ of the human body and its condition is often indicative of our inner health. People regularly visit their doctor seeking treatment for common skin, hair and nail conditions – some of which can severely impact quality of life.

Eczema – also known as dermatitis – is one of the most common skin conditions in the world. It manifests as a painful, itchy rash that is seen in children as young as a few months old. In fact, a fifth of children under the age of two will show signs of eczema. The condition can be pre-empted by using soap-free washes that do not strip natural oils from the skin and moisturisers that soothe the inflamed and cracked skin. Eczema can be treated with anti-inflammatory creams such as topical steroids. 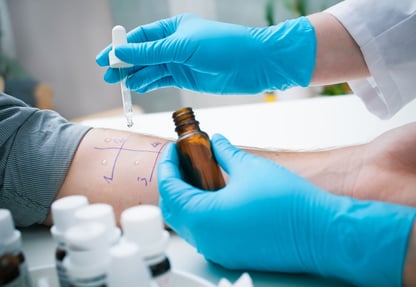 A hereditary condition, psoriasis can cause a great deal of discomfort due to its itchiness, flaky appearance and tendency to spread to other sites on the body. Psoriasis can also worsen with stress and can affect sufferers’ mental health. It can be treated with topical anti-inflammatories or – in severe cases – phototherapy, which involves controlled UV exposure.

The most common dermatological condition seen by general practitioners, acne appears as spots, pimples and oily skin. It is most common on the face and appears most regularly during puberty when hormone levels increase, leading to changes in skin and oil glands. These glands block, causing acne. There are various treatment options, depending on the severity of a person’s acne, but common treatments include benzoyl peroxide and prescription antibiotics.

Vitiligo
A somewhat rarer condition, vitiligo presents as discolouration of the skin. Patches of skin and hair lose their colour, most often around the mouth, eyes and fingers. People with a family history of autoimmune disorders are most at risk, and people with darker skin tend to be more affected as the colour contrast is more obvious. Mild vitiligo is treated with steroid creams, while widespread vitiligo can be treated with phototherapy.

Alopecia is a common term for hair loss. It includes male pattern baldness and alopecia areata, in which clumps of hair fall out creating bald spots on the scalp. People who already suffer from other skin conditions are at higher risk. Treatment is centred on trying to promote hair growth, including therapies like topical and injectable steroids, but no single treatment is wholly successful.

Rosacea is usually associated with feeling flush in the face, which appears as redness or swelling. It generally effects fairer skinned people with light coloured eyes. It can be treated by avoiding triggers such as alcohol or spicy food, but more advanced cases are treated with creams, tablets or laser therapy.

Urticaria is also known as hives. It is very itchy, causing the skin to raise before turning into painful welts. Urticaria has a genetic tendency and once a sufferer becomes susceptible to a specific trigger, the condition tends to be recurrent with further exposures. Antihistamine tablets and creams can help treat urticaria if triggers (such as fruit, seafood, soaps or deodorants) cannot be eliminated.

The fungal infection tinea pedis – commonly known as athlete’s foot – occurs when a fungus attacks the skin after sweaty feet have not been properly aired. It causes cracking, peeling and itchy skin on the feet and toenails and is treated with antifungal creams and powders.

There are many different types of skin cancer, appearing as a mole, freckle, lump or spot on the skin. While some skin cancers are caused by UV radiation and appear on sun-exposed areas of the body, other types of skin cancer – such as melanoma – can be hereditary and appear in surprising places, including between toes, under fingernails, behind ears and on genitalia. Early detection of skin cancer provides the best chance of successful treatment, which ranges from topical creams to minor surgery. Advanced skin cancer – or tumours that have spread to other places in the body – can be fatal, and are usually treated with surgery and combination therapies such as chemotherapy or radiation. Everyone should get a professional skin check at least once a year to catch skin cancer early.