Nodular melanoma: What you need to know

There are three main types of skin cancer that commonly affect Australians: basal cell carcinoma, squamous cell carcinoma, and melanoma. Each of these types has many subtypes, which usually relate to the tumour’s structure, growth, and appearance.

Nodular melanoma is a type of melanoma – a potentially dangerous skin cancer arising from the skin’s pigment cells, called melanocytes.

Around 15 per cent of the melanomas diagnosed in Australia are nodular melanomas.

What is nodular melanoma?

In nodular melanoma, melanoma cells move rapidly downwards through the skin. On the surface, the lesion appears like a nodule (lump) that quickly grows over a period of weeks or months. Within a few months of appearing, nodular melanoma can quickly penetrate deep within the skin.

What triggers melanocyte cells to become malignant (cancerous) is unknown, but it is likely to be a series of changes to the DNA.

Who is at risk of nodular melanoma?

The main risk factors for nodular melanoma include increasing age, a history of melanoma, or having many moles or skin that burns easily. Nodular melanoma is less strongly associated with sun exposure than some other types of skin cancer.

Nodular melanoma can grow anywhere but is most common on the head and neck. It appears as a quickly growing lump with one or more of the following characteristics: 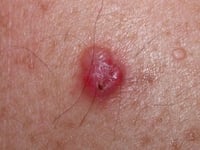 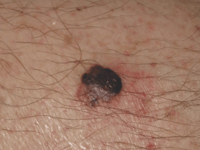 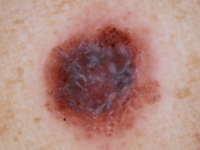 How is nodular melanoma diagnosed?

Nodular melanoma can be diagnosed by your skin cancer doctor during your routine skin cancer check. Since most people only get full-body skin examinations once a year, you might first notice the suspicious lesion while self-monitoring at home between professional checks.

The doctor will use dermoscopy to assess the lesion’s characteristics, looking for signs of malignancies under the skin’s surface which are invisible to the naked eye. The doctor’s diagnosis will be confirmed with a biopsy, whereby a small sample of the skin is cut out and sent to a pathology lab to be assessed. The pathology results will determine whether the entire melanoma has been successfully removed with the biopsy, or whether additional surgeries need to be carried out.

Patients with melanoma more than 1mm thick may be advised to have a lymph node biopsy, imaging studies, and blood tests, to determine whether the melanoma has spread to other parts of the body.

What is the treatment for nodular melanoma?

The initial treatment is to surgically remove the nodular melanoma along with a 2-3cm margin of normal tissue. If the melanoma has spread to other areas of the body, patients may be treated with further surgeries to remove all or parts of the affected organs (including lymph nodes), radiotherapy, chemotherapy, and/or immunotherapy .

What happens after treatment?

It is essential that melanoma patients attend regular follow-ups to detect recurrences as soon as possible, and continue to monitor their own skin between check-ups. Follow-up appointments are usually scheduled anywhere from three-monthly to yearly – for life.

A second invasive melanoma occurs in up to 10 per cent of patients.

What is the prognosis for nodular melanoma?

The risk of death from invasive melanoma depends on several factors, but most significantly the thickness of the melanoma at the time it was surgically removed.

The risk of metastases (spread) for melanoma less than 1mm thick is about five per cent. This increases with thickness so that melanoma greater than 4mm has a 40 per cent chance of spreading.