You've noticed a worrying wart, a changing mole, a freckle that wasn’t there before, or maybe a skin tag you would rather be without. You’re not thrilled about seeing a doctor for your concern – it’s just a spot on the surface of your skin, right? Maybe you could even remove it at home?

Wrong. Here’s why you should think twice before tackling any mole removal without a doctor. 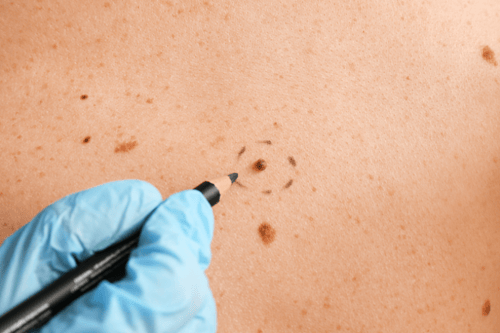 Some things are better left to professionals, such as the diagnosis and treatment of skin cancer.

At-home mole removal devices (or DIY concoctions) may tempt some people into taking their skin concerns into their own hands. But any attempt to cut, freeze, burn or laser your skin comes with several potentially harmful side effects and will likely make the problem much worse.

There are very serious risks associated with trying to perform a mole removal procedure without a doctor. Mainly, you have no idea whether you are removing a completely benign (safe) lesion or a malignant (cancerous) one.

Doctors spend many years training to recognise suspicious lesions, and even after they identify one, they still perform a biopsy to determine exactly what they are dealing with before progressing to treatments.

Removing skin cancers is not as simple as cutting them out or simply freezing them off. The cancer cells permeate deeper than you may think and are not contained to the coloured freckle you see on your skin.

In an attempt to rid yourself of a bothersome mole, you might actually be dealing with a deadly melanoma, which can rapidly spread to other organs in your body if not properly diagnosed and treated. Even when removed from the skin’s surface, melanoma cells can remain in the skin and spread through the bloodstream to other parts of the body.

Another risk of at-home mole removal is the potential for infection. Surgical procedures performed at a skin cancer clinic or hospital involve the sanitation of tools, prepping the skin and post-operative care that can’t be found at home.

At-home mole removal can cause significant scarring that is often avoided when performed by an experienced professional, which counteracts many people’s motive for wanting to remove the mole in the first place.

From the cosmetic risk to the potential for incorrect removal and not properly diagnosing a dangerous skin cancer, trying to remove a mole at home is not advised.